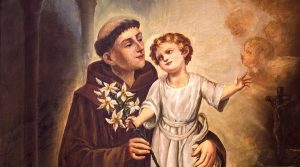 St. Antony of Padua, the wonder worker, was a Franciscan monk and contemporary of St. Francis of Assisi. He preached the word of God not only to men but to fishes and animals. He led a life of total surrender to God who made him an instrument of healing the sick and even in raising the dead. The devotion to St. Antony is alive all over the world even today.
St. Antony (Fernando Martins de Bulhoes) was born in Lisbon to Vicente Martins de Bulhoes and Teresa PaisTaveira on 15 August 1195. Noted by his contemporaries for his forceful preaching and expert knowledge of the scripture, he was proclaimed a Doctor of the Church on 16 January, 1946. The monastery at Coimbra was a center of learning and Fernando was ordained a priest in 1219. He was in charge of the reception of the Abbey and that brought him into contact with the friars of Francis of Assisi who called themselves ‘little brothers’.
Antony became ill with edema and on 13 June, 1231 on his way back to Padua he died at Poor Clare monastery at Arcella, aged 36. There are various legends on the death of St. Antony. One is about his tongue: When his body was exhumed thirty years after his death, his tongue glistened and looked as if it was still alive and moist, indicating his gift of preaching.
Antony was canonized by Pope Gregory IX on 30 May, 1232, at Spoleto, Italy, less than one year after his death. He is venerated all over the world as the Patron Saint for lost articles, and is credited with many miracles involving lost people, lost things and even lost spirituality.