The Women’s cell of St Antony’s college, Peruvanthanam was commenced with the intention of empowering and orienting women to recognize their true potential and to assist them to achieve self-reliance in this competitive world. Make awareness about important issues related to women and provide a medium for discussion and forethought on a range of issues from empowerment to environment is another aim of the Women’s Cell. It aim at intellectual and social upliftment and empowerment of female students. The cell plans to organize lectures and interactive sessions with experts in different fields, create awareness about important aspects pertinent to women, and hold group discussions and deliberations on different relevant topics and range of issues. The Women’s cell also attempts to inculcate among the current generation a sense of social commitment and empathy towards the fellow beings. The women’s cell envisages its commitment to facilitate women to be self-sufficient and to achieve economic and gender justice for a happy and sustainable society.

To enlighten, equip, and empower the female students to be independent and to be a decision maker by instilling self-confidence. 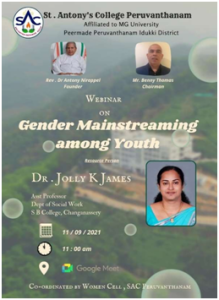 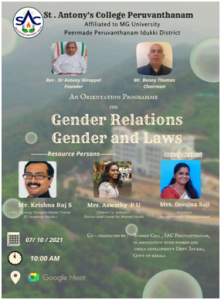 ‘Janvi the Girl with strength’ a short film organised by the Women’s cell of St. Antony’s College Peruvanthanam was awarded Second Prize in the District Level short film competition ‘Youth against dowry campaign 2021’ organised by the District Women child development office,Idukki. On the occasion prize has been distributed by Honourable. Idukki Collector Mrs. Sheeba George in the collector’s chamber. 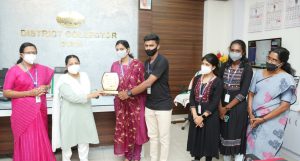 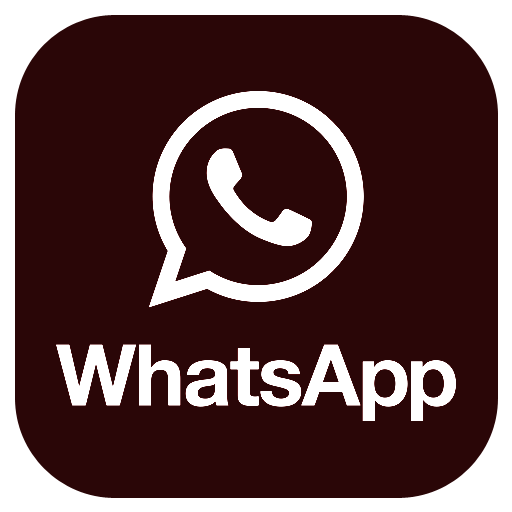